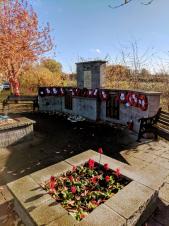 On Sunday 11 November the residents of Sawley marked the Centenary of the Armistice that ended the First World War with an Act of Remembrance which took place at Sawley War Memorial.

Hundreds of residents gathered for the parade from All Saints Church and the Act of Remembrance at the Memorial, with the laying of wreaths and crosses by individuals and organisations from Sawley.

The address was read by John Hay-Heddle and the Bugler, who played the Last Post, was Peter Roebuck.

Before the commencement of the Act of Remembrance, there was a dedication of the new memorial plaques raised in memory of those citizens of Sawley who gave their lives in the two World Wars of the 20th Century.

Councillor John Sewell, Chairman of Sawley Parish Council was the inspiration behind the poignant anniversary dedication. He was joined by Councillor Kewal Singh Athwal, who graciously sought and secured the funding for the plaques from a Derbyshire County Council community grant.