Councillor of the Year award for Sawley’s Cllr Aram 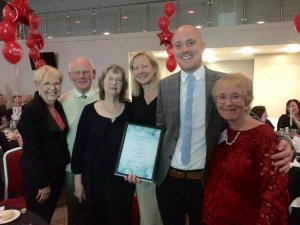 Sawley Parish Council is pleased to announce that vice-chair Councillor Thomas Aram has been announced as Runner-up in this year's Star Council' award for Councillor of the Year.

The National Association of Local Councils (NALC) announced on 30 October 2017 the winners of the Star Councils 2017 awards.

The Star Councils 2017 awards are an all important recognition of all the amazingly effective hard work being undertaken by local councils, local councillors, local council officers and workers as well as county associations.

NALC were inundated with hundreds of nominations for this category from around the United Kingdom, which shows and highlights the localist powerhouse work undertaken at the neighbourhood and community level. This all comes within the background of opportunities available through devolution and localism; and the challenges of the difficult financial climate many local areas face at the moment.

"The judging panel on the day had to make some very tough and difficult decisions because the standard of entrees were so high. Indeed the judging panel remarked it was wonderful and amazing to see all this incredible community engagement going on in our sector. It was a day to make us proud of the sector!"

The winners in each category were announced at the Star Councils 2017 Awards Ceremony at the NALC Annual Conference in Milton Keynes on 30 October 2017.

The judging panel said "We were very impressed with the level of engagement that Cllr Aram undertook with organisations that were outside the normal networks, that local councils would be accessing. Indeed the general work around getting funding to improve Lakeside car park and for community tree planting is mightily impressive"

Notice for the Exercise of Public Rights - External Audit 2021/22 sawleyparishcouncil.or…